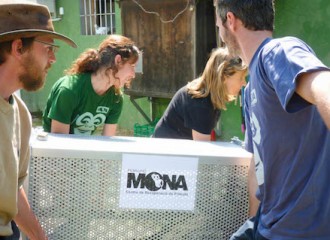 During this confinement, the news came out that an abandoned marmoset had appeared in an urbanization in Alicante, which has now joined the waiting list to be accepted in a rescue center.

Data collected in 25 EU member states by EARS, (European Alliance of Rescue Centres and Sanctuaries), Eurogroup for Animals and AAP, gave the alarming figures that in 2017 alone there were around 22,000 new cases of animals to be rescued. And this is just the tip of the iceberg, because not all centres register the animals they cannot take care of.

And what about the current crisis situation by Covid19 in the rescue centres?
We at MONA Foundation fully agree with the latest release from the organization Eurogroup for Animals  and we support their call.

The spreading of the novel coronavirus (COVID-19) is hindering the survival of thousands of animals hosted in European rescue centres and sanctuaries.This added to adifficult situation in which, already before the COVID-19 crisis, housing for seized, confiscated or surrendered wild animals was severely limited in Europeand rescue centres were suffering from a chronic lack of consideration and funding[1].

Rescue centres and sanctuaries offer a better life to animals that have suffered in substandard zoos, have been cruelly exploited in circuses or that have been confiscated from private owners or illegal and unscrupulous traders.  As most of the time these animals cannot be returned to the wild, rescue centres and sanctuaries in Europe play a critical role in ensuring the animals’ welfare and in supporting Member States’ effort to fight against wildlife trafficking.As well as providing housing, veterinary care and rehabilitation for the animals, many rescue facilities directly participate in the seizure and/or confiscation of the animals and in their subsequent translocation, often across national borders.Their staff can offer expertise directly to the government in identifying, handling, transporting, housing, and caring for specimens, or can train government representatives in these skills.

Once an animal is taken into care by a rescue facility, significant costs are involved. These include food, staff, medicine, veterinary care, construction, maintenance and heating. Where the animal has been placed at the facility by the authorities, it could perhaps be assumed that such costs would be covered by the State.However, many governments provide no funding at all for the care of the animals they place at rescue facilities, as there is no budget allocated for it.

In reality, rescue facilities in Europe operate thanks to the generosity of private donors and, in some cases, to the tickets sold to their visitors. However, with the COVID-19 restrictions adopted in locked down European cities, visitors are not coming anymore.In the longer term, the coronavirus’ disruption of countries’ economy and people’s savings could worsen the situation.

The devoted staff of rescue centres is struggling to look after the animals during the present crisis. They will never leave the animals’ welfare be compromised, but this comes at a cost. In the case of Fundació MONA, since before the obligation of confinement, a team of 6 people confined to the primate rehabilitation centre to avoid being infected and infecting the rescued animals, while the rest of the personnel strive to prevent the project from collapsing due to a lack of donors.

Rescue centres and sanctuaries urgently need financial support to continue to operate and then provide appropriate care of the animals they host.

Eurogroup for Animals believes that